Couchsurfing in Semarang and Jepara

August 02, 2011
I'm now in Jepara, sitting on the rooftop of a homestay within a stone's throw of the harbor, under the stars, just outside a room where I'll spend the night, for six dollars. (wifi not included, I'll have to find a hotspot to upload this later...)

I had an exciting bus ride from Jogja to Semarang. I was told I could find an air con class bus at the station on the east side of town for 40,000 rp, but when I got there I was told there are no air con buses and was ushered onto an economy bus, for 20,000. It was crowded full but not too hot with the windows open. An older man, an English teacher, was quick to sit next to me and ask me for my full name, address, and telephone number so that he could find me when he comes to visit the states. He turned out go be not too creepy though and pointed out interesting things on the ride, like the massive volcanic boulders that had been thrown from Mt Merapi just a few months ago. Deadly, he said, but useful, since the locals built their houses from the freshly supplied rock.

We pulled into a bus stop at some other town on the way and the conductor instructed me to get off and transfer to another bus. I was able to confirm with another passenger that the new bus was also bound for Semarang (with my awesome Indonesian: "ke Semarang, ya?"). Amazingly, the conductor on the new bus accepted my ticket from the last bus as payment and didn't ask for extra money. And once we arrived in Semarang, I had no idea where to get off, but the conductor spoke with my couchsurfing host on the phone and dropped me off with a taxi driver, who he gave instructions where to take me. As far as I can tell, I wasn't ripped off at all. Completely amazing.

Poppy, my first couchsurfing host and new best friend, picked me up along with her sister, brother in law, and their 4 year old boy in their car, took me to dinner, and brought me back to her mother's place in west Semarang. She runs a little DVD rental shop out of the front of her home. We sat on the floor and chatted a bit and I managed to say "I'm pleased to meet you" in indonesian to Poppy's mom, who I think was tickled that I could speak.

After a bit, Poppy and her friend took me out on their Vespas to see the town. Don't worry mom, I wore a helmet. We had a bit of street food, watched the cars go by, and called it a night. My sleep was full of dreams and I think I felt a gecko run across my chest in the night.

Poppy took off work to take me around Semarang some more today and wouldn't let me treat her to lunch, but insisted on paying. I am still just as hopeless at this as I ever was in China. She put me in touch with another of her couchsurfing friends in Jepara, Eni, who is my new new best friend.

I wasn't so fortunate with the bus driver this time around. They charged me at least double price, dropped me off somewhere near the terminal station but not close enough so I knew where I was, and then asked for 50,000 rupiah to take me to my destination. My efforts to have Eni explain things to them over the phone failed when the only thing they tried to communicate to her was the amount of money they wanted to extort from me. I got off the bus and waited for Eni to come to my rescue on her motorbike. I couldn't think of anything interesting to say to the becak drivers who came up to me while I waited. I thought about commenting on the weather but didn't know how to say weather. Oh well.

Eni was unfortunately unable to host me, but brought me to this homestay and helped negotiate the price. She just rode off to break the fast and pray, and left me to take a refreshing Indonesian style shower (pouring cold buckets of water over my head), and blog. She's coming back for dinner in a bit.

The boat to karimunjawa leaves at 9am tomorrow. I'm told there is Internet on the islands. Couchsurfing is awesome. I will try to upload this with pictures tonight... 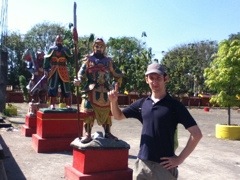 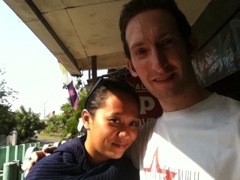 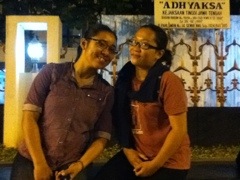