November 15, 2007
I've been reading hundreds of articles on bird flu from various Chinese media for work.  The point is basically to look at changes in media openness through a particular case study.  For the most part it's mind-numbingly dull, as the reports are just page after page of government boosterism, but occasionally I find an amusing article here and there.  My favorite was this picture from CCTV's Focus, showing the effective measures the government took to prevent spread of the disease: 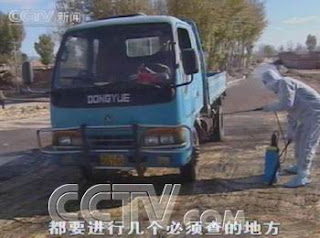 I wish you could get a 360 degree view of the scene.  I think this guy in a white plastic suit is just standing by himself in the middle of nowhere waiting for trucks to come by.  Also key is the disinfecting sprayer he's using, which is the same model I bought for use on Kite Runner.  We filled it with a mixture of water and glue and used it to stick shredded paper on trees.  It broke after a day.