July 30, 2011
I stayed in Jakarta another day to take it easy and buy a ticket to Jogjakarta, and so I could catch up with the local frisbee players who get together for pickup on thursday nights. After a delicious breakfast and free wifi at mcdonalds, I walked to Gambir station, nearby my hostel, and bought a ticket to Jogjakarta, eksekutif class. I had some nasi campur at a restaurant in the station, ate a pepper and nearly exploded, and then walked over to Monas, the national monument. Lonely Planet said people call it some president's last erection. It was pretty quiet.

I took the bus up to Kota, the old part of town, and walked around for a bit. Lonely Planet recommended that I walk along the canal, which smelled terrible. I was hoping to be able to walk to the harbor and see some boats, but couldn't manage to find a road that led to the water, and just walked down the side of the street while big Chinese-made diesel trucks barreled past. Eventually I gave up and hopped in a bajaj back to the bus stop.

That evening, the frisbee players were playing on a turf field near stadium Senayan, where a world cup qualifying game was going on. It was pretty crazy. City buses were driving around with kids on the rooftops playing drums and chanting. After the game finished, some local guys came and joined us, and the pickup got a lot more interesting. A couple kids had been playing for a while and had decent throws.

The next day the train to Jogjakarta was more than an hour late departing and two hours late arriving. The scenery was nice but I half dozed through most of it, and spent the rest of the time focused on my Indonesian audio lessons.

The weather in Jogjakarta is beautiful. Nice and breezy, and the air is clean. After checking in at a hostel near the train station, I took a becak down to the south part of town to meet up with a friend's friend for dinner. He happened to be heading out of town for an art project in Taipei that night, by not before he introduced me to a few of his friends, who took me out drinking. We sat on the ground outside the Circle K near my hostel and had bintang beers and local red wine, and smoked clove cigarettes. The bar across the street had a reggae band playing. Then we rode down the street by motorbike for some pretty incredible street food, with some kind of stewed jackfruit dish, chicken, eggs, tofu, and rice.

Today I woke up late and walked around. Tomorrow I think I will walk around some temple. Ramadan starts on Monday, when I think most activity in the city will shut down, and then I might head to the Dieng Plateau on my way to Karimunjawa. 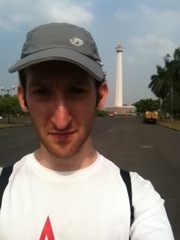 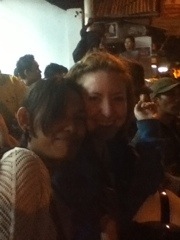 Sorry the camera on this thing is junk.