My new job and poop gardens

April 03, 2008
I finally started a job on Monday.  It's with New Oriental, the big English training corporation, but the branch I'm with is fairly small and new and does online Chinese teaching aimed at foreigners.  It's supposed to be a new competitor of Chinese Pod, which is well known and seems to make a fairly decent product.  See New Oriental's pitiful efforts at Target Chinese.  Note the panda wearing headphones, and of course the obligatory gong sound as you enter the page.  Fun fact: not only did the Chinese invent gunpowder and movable type, they also invented stereotypes!  Also key are the three sexy babes who really like learning Chinese, and let's not forget Jack, the awesome black dude who will be teaching live class in 2 hours, 15 minutes and 38 seconds.  Better hurry up and subscribe.

Here is a picture of my cubicle: 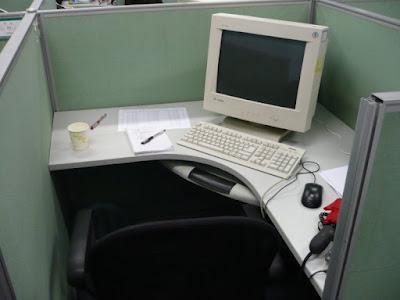 I don't know if the picture quite portrays how small this thing is.  I can't really turn my chair if somebody comes to talk to me, and I have to scoot out the side to get up.  And see the tray where the keyboard is supposed to go?  I think maybe if they gave me a stool to sit on I could pull it out.

I didn't see any small cubicles like this when I came into interview; everybody was sitting in pretty reasonable open workspaces, so as you can imagine, I was not happy about my assignment.  I was also surprised to discover on my first day that I was only going to earn 80% of my salary during my three month trial period.  And to add insult to injury, they told me on my second day that in order to get a work visa, I have to pay for a physical from the government's exit and entry inspection bureau, which will cost me 650 RMB -- more than a tenth of my salary during the trial period.

On Wednesday I stopped the HR guy in the hallway to tell him I quit.  He said, "Okay, I'll get my assistant to help you fill out some forms."  No, please, don't try and stop me.  Really, it's too much.

Well, I waited around for his assistant to come so I could leave already, and finally my boss came and told me she didn't want me to go, and asked what they could do to keep me from leaving.  I told her they needed to pay me what I was originally promised, get me a human-sized workspace, and pay the costs of my physical.  She told me there was nothing she could do herself, but suggested I go talk to the general manager and try to negotiate.  I said I didn't want to bother the manager myself, so my boss went and talked to her for me, and eventually the manager came over all smiles and invited me for a chat, where she agreed to pay me my whole salary, and get me a decent desk by Monday, but wouldn't budge on the 650 RMB.  Fine.  Back to work.

The area around my office is really interesting.  There's a big public square with trees and everything, and about half of it is actually built on the tops of a number of commercial buildings, with walkways across the roofs.  On one side of the square there's a sort of garden showcasing big pieces of poo.  I don't know how else to describe it.  Here's some pictures: 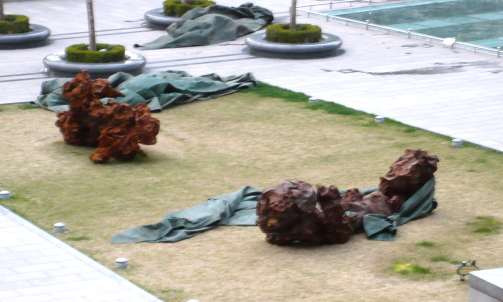 I don't know why there are tarps there.  These two chunks must have recently been unveiled.

The red one on the left is apparently post-hot-pot spicy poop.  This amuses me to no end during lunchtime.

As to what my job actually involves, it's nothing really worth mentioning, but you'll probably see me appear in some of the free lessons on our website soon.  They say my voice is "magnetic," but I think it sounds like I have a cold.

Tao said…
-- "Why do Chinese women like foreign guys so much and often marry them?"

Svetoslav said…
Impressa:) or as a Portuguese, vpechatlilso!
4:44 AM

Nayeli said…
and the hundreds of pages of regnadis i have to read and catch up on.recently, i was logged into my girlfriends online chat, and i found out that she was talking with another guy asking if he could get her some vodka to take to a hotel for a school event with thousands of coeds. she was going to attend. she told him that she and her friend (female) were going to have the a room to themselves in hotel and get totally f*cked up. When i read this, i was completely devastated. Nothing but horrific images came to my mind and i felt betrayed in a way because i have always trusted her, and we have had serious talks about drinking alcohol and about partying before. And to see this thing going on behind my back is devastating to me. the next day i tried to hint it out if she could tell me if she was planning something behind my back or is she was thinking of doing something. she kept denying it but i knew she didn't want to admit it. i finally broke out and told her i knew about her plans and that i cannot trust her anymore if she was going to do these kinds of things behind my back. yet instead of feeling any sorrow for the promises she broke and heartbreak she caused, she gets mad at me for spying on her. i do respect her privacy but this time i felt suspicious of her and consequently caught her in the act. so she tells me that she does not want to hear or talk to me ever again forever. i took that comment to the heart and felt as if she was breaking up with me. so then i told her we were done . then shecompletely flips out on me and basically talks sh*t about me and how im not good enough for her. blah blah .. so then later that evening i asked if we could talk and work it this problem. and i apologized to her and everything (even though it wasnt my fault) and she wouldnt take me back. she decided we should just be friends for a while and take a break.i really love her and this is the first time we have ever crossed the line of breaking up, but i just want to fix things with her. but all she tells me is that its my fault for breaking up with her. and im the one being blamed for everything, when in reality, it was she that was doing things behind my back and she basically broke it off with me (by telling me she does not want anything to do with me anymore ever again) .. all i did was say we're done and now im being blamed for everything.i have been trying to fix things with her and she told me that she wants a break (no communication, no texting, email, nothing whatsoever) until the time is right. after a day or two she sent me a couple messages saying hi and we talked, then the day after we hung out. and we ended up kissing, everything had gone great, romantic dinner, fun evening, happy conversations then the next day she emails me saying that she still feels that im a complete asshole for breaking up with her and that we should go on a break again. this really breaks my heart because i feel as if i have become a complete stranger to her and she calls me by my first name now as if im some random guy talking to her.. im just really scared that she wants to go on this break so that she could move on and forget about me. i really dont know what to do anymore. she keeps bringing up the fact that i broke up with her when in fact it was her fault and i only feel worse about myself for something i shouldnt even be getting blamed for. i really want this relationship to workout for us and i want to put all this mess behind us but she doesnt see it that way and she doesnt want to talk or see me anymore.i want to fix things with her but i dont know how. she wants space but i want to talk and fix things. i really believe we can both work this out by communication, but shes giving me the silent treatment. what should i do???
5:27 PM

non owners car insurance quotes Saginaw MI said…
The ability to think like that is always a joy to behold
8:59 PM